This includes the 12 miles Mike and Derek cycled to recover joes phone! 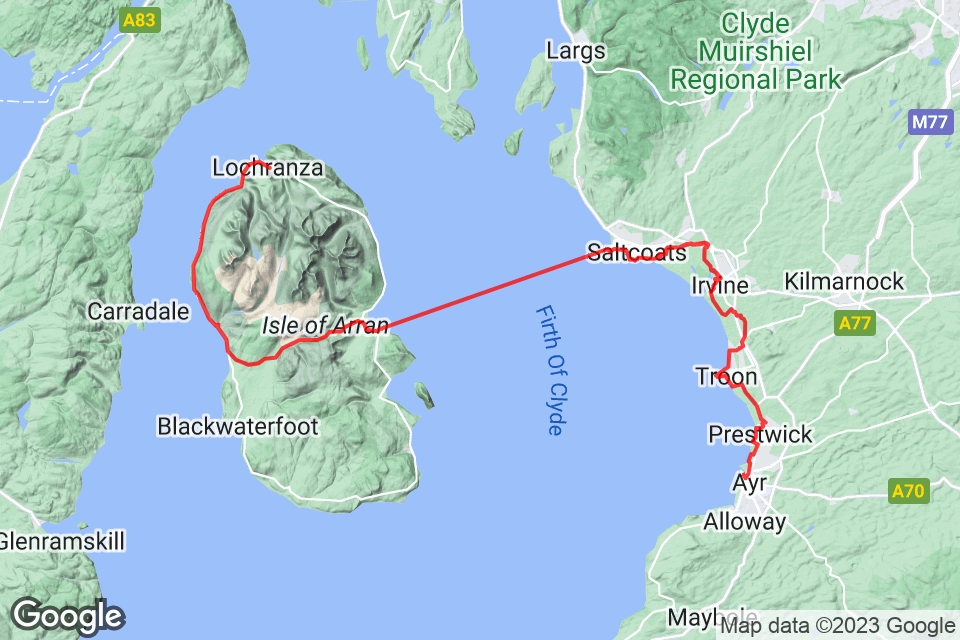 Watch a vide of the route.

A surprise awaited us when we awoke this morning. After heavy rain all evening and night, it was a bright morning.
After a good continental breakfast, courtesy of the SYHA, we divided into two groups. Joe and Rowland took the direct route to the Brodick ferry terminal via the East coast road.

Meanwhile, Derek, Terry and Mike headed West towards Machrie to do the Arran North Loop, which includes the infamous String Road. This was a wonderful route following the coast in the lovely sunshine. At Dougarie, we stopped at the Lodge to visit a distant relative of Mikes, who have lived on Arran for 45 years (see their website at https://www.dougarieestate.co.uk/). Whilst there, we saw a red squirrel in the garden.

After coffee and waiting for a shower to pass, we headed across the island to Brodick via the String Road – a long slow climb to 750ft, followed by a hair-raising descent into Brodick, where Mike reached 45mph!

We all met up again at the ferry terminal and boarded the Isle of Arran ferry to Ardrossan, and crossed in the beautiful sunshine.

The afternoon brought a different experience to the ride. Not long after leaving Ardrossan, Joe was knocked off his bike by another cyclist who was trying to overtake on a corner with a very slippery surface. After picking himself up, Joe was okay, but his bike was not. His rear wheel had been buckled. Terry effected a temporary repair, and we found a bicycle shop about 5 miles away. We shared Joes panniers amongst us and cycled slowly to the shop.

On reaching the shop Joe realised he had lost his phone, so Mike and Derek returned to the scene of the accident, while the bike was being repaired. Fortunately the phone was found.

Meanwhile, after advice from Duncan, the bike shop owner, Joe decided it was best to have the rear wheel replaced. The bike was repaired, given a quick service and we were off again. A very big thumbs up to Duncan at Irvine Cycles for his excellent service.

The final 17 miles to our overnight stop in Ayr were along NCN 7. This was a mixture of coast paths and promenades, paths through tired port towns, expensive golf courses (Royal Troon, being one), Prestwick airport and housing estates. Not the most beautiful of routes, but mostly traffic free.

Our evening entertainment was hosted by Weatherspoons, in a converted Free Church – The Old Kirk. Cheap beer and cheap food was just the ticket tonight!