(Note the route below is longer, but that includes the ferry journey!) 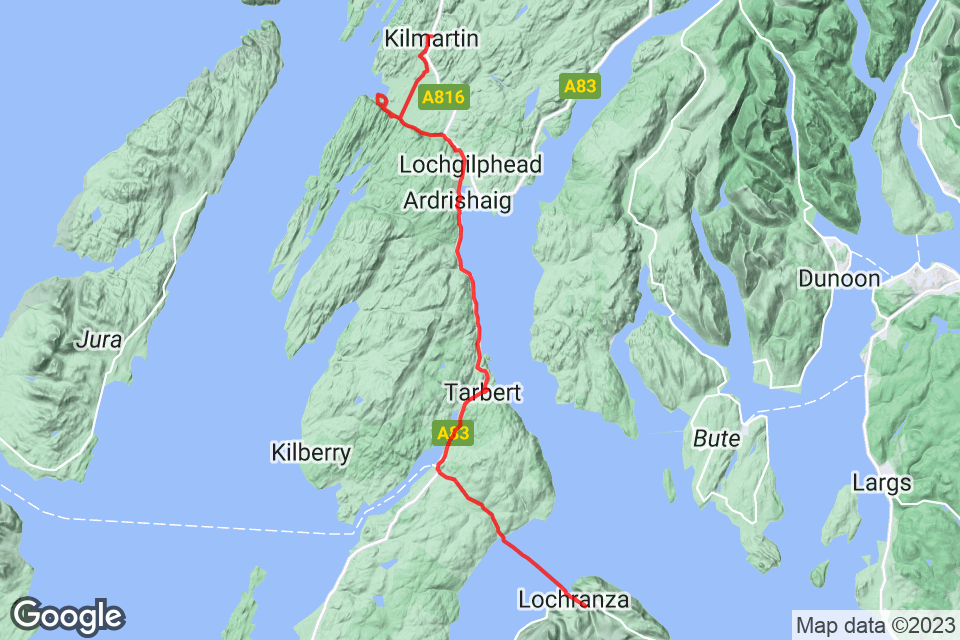 Watch a video of the route

Today was the closest we have to a rest day – we had planned only 37 miles.

It was a lovely sunny morning as we had a leisurely breakfast overlooking the lovely Glen. Chatting with our hosts, we were told that this area was where the Scots originated and there were hundreds of Neolithic monuments close by.

As we were leaving, a light shower started, so we donned our waterproof coats. A few yard along the road, we joined a very rough track that took us on to NCN 78. Almost immediately we came across a cairn, which we explored. The rain had stopped and the sun came out, so we removed our waterproofs. A few hundred yards and we explored a 2nd cairn and shortly afterwards a circle of standing stones. The rain started again, so waterproofs were donned again!

A few miles further on, we met the picturesque Crinan canal, which was built in the mid-1800s as a shortcut for ships heading to Glasgow, instead of travelling around the Mull of Kintyre. 9 miles long and having 15 locks it saved 100+ miles. A lovely cinder track took us to the village of Crinan, where the canal starts. We tried to find the harbour, but a long descent (and thus a reciprocal ascent) and some heavy rain, put us off, so instead, followed the canal along its entire length to Lochgilphead.

We had to follow the main A83 from Lochgilphead to Tarbert, which was busy at times with a few drivers who passed too close. This was not helped by the frequent showers and, towards Tarbert, the sharper and steeper climbs.

After lunch we continued on the A83 with a few more sharp climbs before turning off at Kennacraig towards our ferry to Arran at Claonig. This brought our biggest hill of the day, with a 14% gradient at the bottom. We climbed about 650ft over about 2 miles.

A 30 min ferry journey brought us to Lochranza on the Isle of Arran. Our YHA did not open until 5pm, so three of us quickly cycled to the local distillery and just got on to the final tour of the day. The distillery was only started in 1995 and was started as Arran was the only main Scottish island without one. It was an interesting tour with a couple of tastings along the way.

Our evening meal involved a short Walt in the rain to the local inn/hotel. The bar had the biggest selection of whisky we have ever seen – over 500 different ones, according to the barman. The most expensive was £192 for a measure!