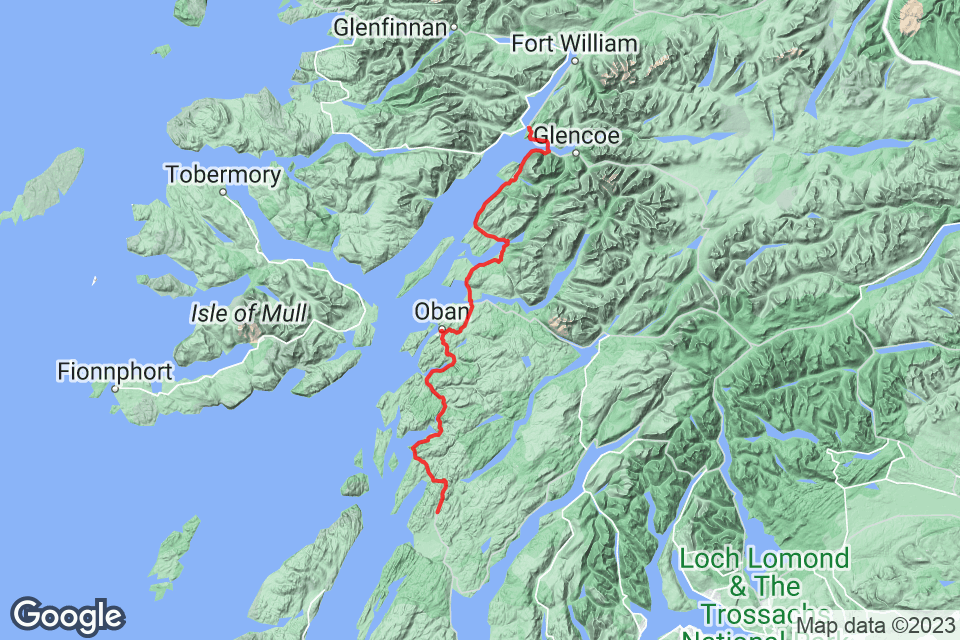 Watch a movie of the route

Today was going to be a ‘big day’ with the 2nd most climbing of the whole route, as well as being one of the longer distances.

We were worried by the forecast last night, and the heavy rain overnight, but the morning looked much more promising.

As it turned out, the weather gods smiled on us, with no rain, some sunshine and a northerly wind to help us along.

After a light breakfast in the bunkhouse we followed NCN78 route south to Oban. The route is mostly dedicated cycle route following the main road and old railway lines, keeping close to the shores of the Lochs – Leven, Linnhe, Etive, Creran. A beautiful route and excellent cycle path, that is mostly flat.

An early break was had at he Creagan Inn on Loch Creran, where we had coffee and scones with a lovely view across the Loch.

We crossed the bridge at Connel and continued on the NCN78 ‘slightly hilly’ route to avoid the busy A82 – which had some very sharp climbs! After a long, steep descent into Oban, we decided to it was time for lunch. We eventually found a lovely cafe in the main ferry terminal – not where you’d expect to find one. As we arrived one of the CalMac ferries was docking – they are quite large ships! A few of the guys had Cullen Skink, a thick fish chowder. The staff were very friendly and we spent some talking to one of the chefs who is thinking of cycling coast to coast – of Canada!

After lunch brought the hills. A good climb out of Oban showed what was to come. Following the main A816 took us alternately along lochsides, forests and heathland before the final big climb south of Barravulin. As soon as you turn the corner, you see the sign warning of a 12% gradient. We climbed over 500ft in about a mile, with an average of about 10%, with some much steeper sections along the way!

A lovely descent took us into a green valley and to The Old Manse in Kilmartin, our B&B stop for the night.

Dinner was had at the Kilmartin Hotel, a few hundred yards from the B&B. Opposite the pub was an old church with 12th to 17th Century standing stones in the graveyard and a 9th century cross in the church.

So, an excellent day – good weather and great cycling, with a few hills to test the legs!