Day 2 dawns with a forecast of heavy rain. So we all donned the wet weather gear 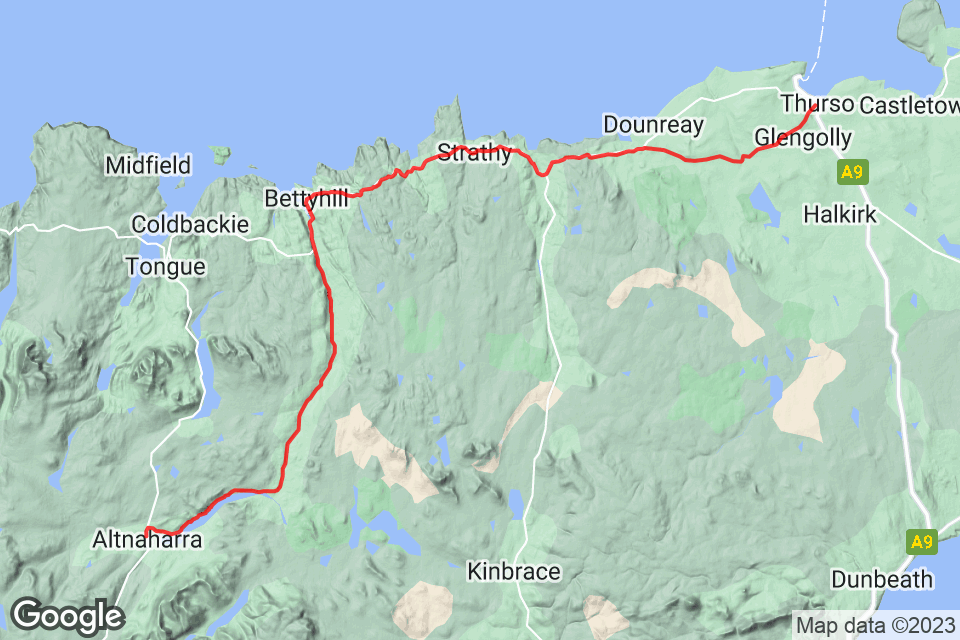 Watch a video of the ride
A wet, windy and longish climb out of Thurso was a portent of what was to come.

We headed west up and down long hills, in the heavy rain, past Dounreay nuclear power station. At Melvich the pub opened early to serve us wet and cold cyclists, hot coffees and cakes.

On to the Bettyhill cafe for hot soup lunch, where the rain finally eased off. We then turned inland, heading south,

following the River Naver. A very pretty valley (despite the rain) with a great salmon fishing river – a few wealthy “rods” were out with their minders, apparently paying £1000 a day, and they have to return the fish! The gillies gave us a wide berth when passing on the narrow road, but the clients did not, leading to a heated exchange when passing them shortly after…

As the road turned west the river became the Loch Naver for our last 10 miles to Altnaharra (which holds the record for coldest settlement in Britain). The sun broke through briefly as we arrived to a very welcoming B&B who were very used to hosting JOGLE cyclists.

Our hosts Mandy and Lyndsey produced a lovely evening meal (using venison shot by Lyndsey). They were proud of the Ultra fast broadband that had just been installed in the village, but less so of the very expensive  water treatment plant (£2m for 17 residents!),