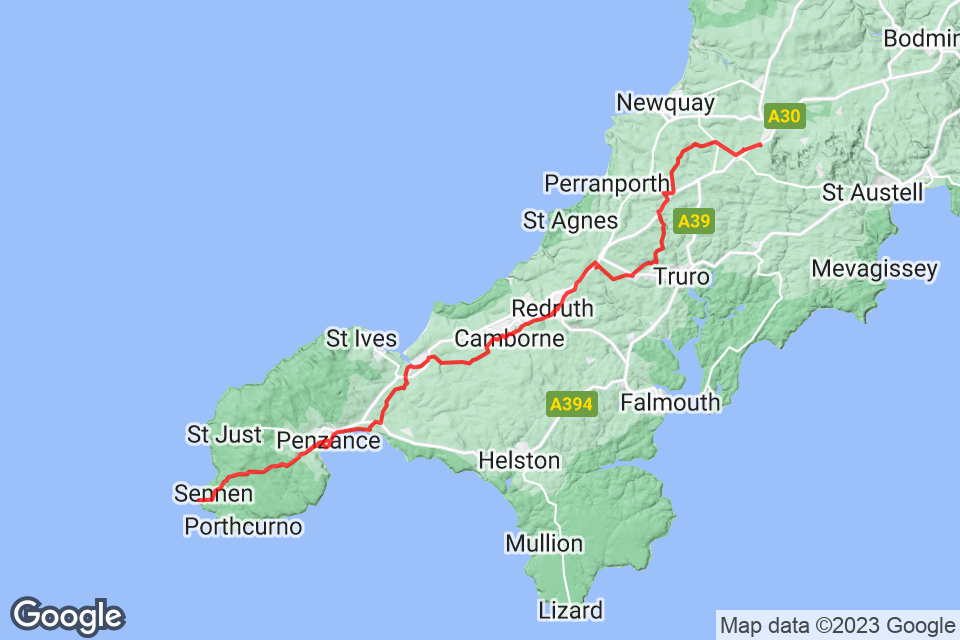 Watch a video of our route
So this it it – our final days ride.

We awoke to rain and heavy mist – not what was forecast. Into the Brewers Fayre, next door, for breakfast. We were the first customers of the day. We all had cooked breakfast.

After retrieving our bikes from the hotel laundry room and a little bit of tweaking to gears and some oil, we set off. The rain had eased off, so it was now just a very heavy mist.

This is Cornwall, so we are in for a few hills today, but the first few miles are downhill, lulling us into a false sense of security. The first hill, soon brought us back from our reverie! On the way up, Derek suffered a problem with his gears locking up. Back-pedalling cleared it. On the next hill, he suffered the same problem, so we stopped to see what was wrong. Nothing obvious, but we made some tweaks and carried on.

The hills continued, but they were mostly short and sharp. We crossed the A30 and onto another hill, and this time Derek’s chain came off. Terry and Rowland waited and then we set off up the hill. Derek missed the turning, halfway up the hill, and continued to the village at the top, where he waited. A few phone calls later, and we thought our paths would quickly converge – they didn’t.

We agreed to meet in the village of Scorrier, a few miles further on. The route took Derek to a ‘cycle path’ but one look convinced him not to use it. On returning to the main route, he met everybody else looking for the same path. A quick detour took us down the old A30.

We came across a very busy ‘truckers’ cafe called Smokey Joe’s. There were no trucks, but lots of people having breakfast. Of course, we had cakes!

Next came Redruth, with a slow climb and a rapid descent into the town. A few twists and turns through the town centre eventually took us onto the NCN 3 route, via a short steep climb. Still in Redruth, this took us through housing estates right next to abandoned mining pump houses, and sights of (working) wheel towers – a curious sight (for us, anyway!).

Route 3 continued, up and down, southwest, passing the outskirts of Camborne and eventually to Hayle, and a beautiful sandy bay and large viaduct. We then headed inland, towards Marazion. Here, we saw St Michael’s Mount, and cycled along the promenade to the Marazion cafe for lunch. During lunch, the sun was hot, and we all removed several layers. Then the cloud came, cooled down and it started raining, so we put the layers straight back on again!

We dropped our panniers at our respective accommodations in Penzance, for the final few miles to Land’s End.

The sun was now shining, as we headed up the hill out of Penzance – a long slow climb to about 450ft. With about 2 miles to go, the fog descended as we headed towards the finish.

On reaching Land’s End, a welcoming committee, of Juliet, Diane and Derek’s sister June and her husband Dave, was waiting and cheering us over the line. A large banner, champagne and cake awaited us! Lots of photos were taken and congratulations all round. On checking our sponsorship status, we found we had just passed £10,000.

We then headed back to Penzance for a wash and brush up, before heading out to The Turk’s Head for a celebration meal.