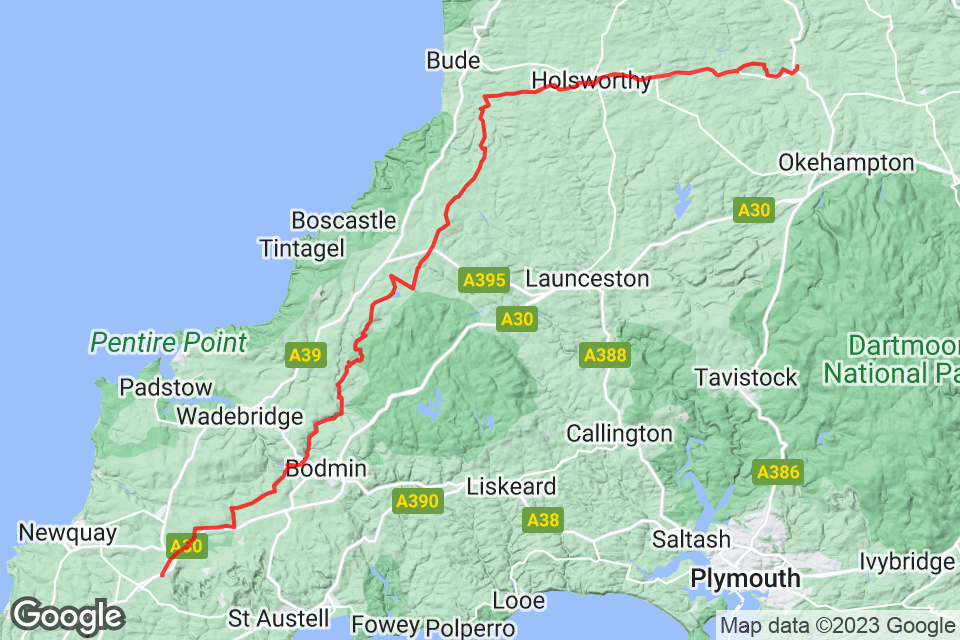 Our rooms in the Tally Ho Inn were above the bar and entrance to the pub, so some of us had a disturbed nights sleep, as the last customers did not leave until gone 1am.

But, it was an early start, as we face a long and hilly day. Breakfast was basic continental  in the room – muesli, toast, yoghurt.

Overnight rain had left the roads damp and there were heavy grey clouds overhead. The forecast was for a strong southerly wind, so our luck with headwinds has well and truly run out!

We headed west, and were quickly out into the countryside, and following a tarmaced disused railway line, and then onto lanes. We joined a quiet A road for about 8 miles, that took us into Holsworthy, where we found a Waitrose to make up for the small breakfast, where we had coffee and cake – and soup plus Croque Monsieur for Joe!

Leaving Holsworthy, we climbed onto a disused viaduct over the River Deer, giving great views over the countryside. We continued heading west, towards Widemouth Bay, on undulating country roads, with a few sharp climbs. Just as we got a view of the sea, we turned south, and started following NCN 3. This is where we began to feel the effects of the headwind. There was a long slow, and occasionally steep, climb to Week St Mary, with further great views. The inevitable descent was then followed by further climbs as we headed onto the high moors.

Near Davidstow, we reached our highest point of the day at over 900ft. On the moor, is a large airfield that is used for microlights, but, due to the winds, there were none flying today. It was a large military airfield and there were 3 runways, which are now broken up and full of sheep grazing! There is a road cutting across the moor/airfield and this runs northeast, so gave us our only tailwind of the day.

Heading south again, we continued across the high moors with many ascents and descents, passing a couple of groups of teenagers who looked like they were doing their Duke of Edinburgh awards.

By now, it was gone 1:30 and we were getting tired and hungry and we eventually came to the village of St Breward, hoping we might find somewhere for lunch. We spoke to a local, and in a thick Cornish accent, told us to go to The Old Inn, just by the church. This turned out be perfect, with an extensive menu, served all day. 4 of us had huge burgers and chips. Rowland was restrained and had a panini.

We were now only 25 miles from our destination, and thought the major climbs of the day were over. After a couple of wrong turns, we found our way into the Camel Trail, an excellent cycling/walking route alongside the River Camel, using an old railway line. We followed this for about 8 miles. We emerged into a lane and immediately began climbing. Although not as long as the morning hills, due to fatigue and headwind, we found each of the 5 ascents, tough going. We even found our steepest climb so far, a short section of 22.5%.

The final couple of miles to our Premier Inn, took us through the town of Indian Queens, apparently named after a coaching inn from the 18th century.

The Premier Inn is right by the A30, so there is a constant drone from the traffic, but the rooms are comfortable and the staff are friendly. Our evening meal was at the Brewers Fayre pub/restaurant next door – not our first choice, but very convenient! We commented that they must use extra strong chairs due to the high number a ‘large’ customers…

Off to bed early tonight as we have another long day tomorrow, when we finally reach Land’s End.