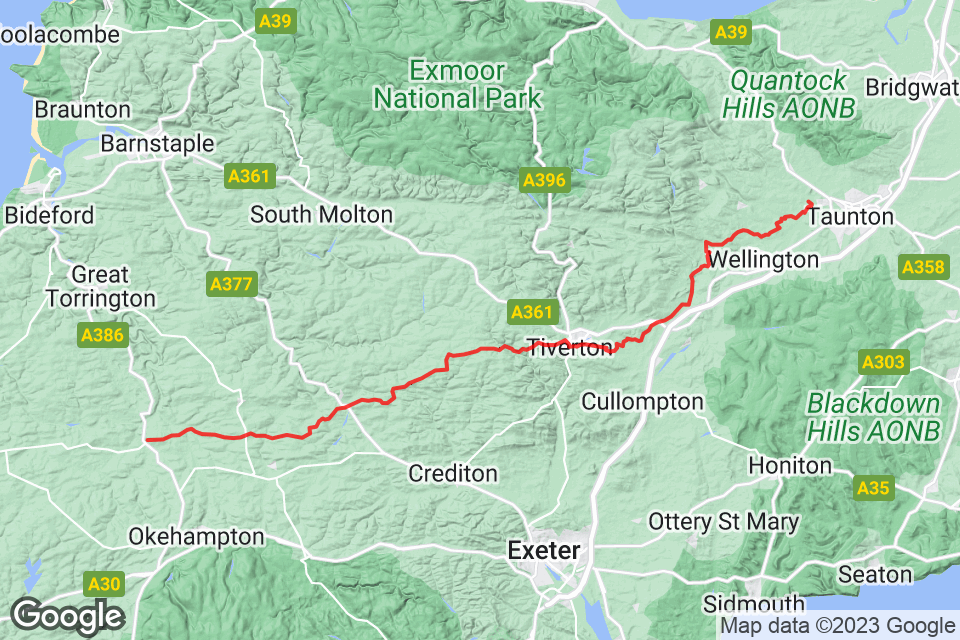 During our early breakfast, our landlady, Jan, generously gave us £20 donation. We have now raised about £9700.

After a great breakfast at Wick House B&B, we set off into a chilly morning, but with glorious sunshine and clear blue skies. We were quickly into nice country lanes, but did not get to see much of the scenery due to the high hedges and sunken lanes.

About 10 miles after starting, we passed the 1000 mile mark of our journey, which we celebrated with photographs and a drink of water!

We were mostly following NCN 3 which eventually took us onto the Grand Western Canal. This is an 11 mile section of canal with excellent paths and fantastic scenery, the canal being higher than some of the surrounding countryside. We did not see any boats using the canal, but there was lots of wildlife.

We left the towpath shortly before Tiverton and immediately joined a disused railway line that took us into Tiverton.

At the Flying Pickle cafe and deli, we met two friends of Joe, Richard and Linda, who live quite locally, and were waiting for us. After coffee, and the inevitable cake, we asked the deli to make us some sandwiches, as we were unlikely to find a place for lunch on the afternoons route. Richard very generously paid for our coffees and lunch. Joe also found time to buy a new phone charger, having left one in Bristol.

Immediately after leaving Tiverton, we encountered the appropriately named Longdrag Hill. This was a 1.2 mile road, climbing over 400ft, to the equally well named Tombstone Lane, at the summit! This was the beginning of an afternoon of rolling hills, including our steepest hill yet, with a max gradient of 21%.

At Morchard Bishop, we stumbled across a small shop and cafe. We bought coffee (and cake!) and they allowed us to eat the excellent sandwiches we had bought in Tiverton. Although small, the shop seemed to have most provisions, as well as a couple of tables to eat at, a proper coffe machine and home made cakes. The owner said she had a lone female LEJOG rider come through earlier, and having just started in Land’s End, was finding it tough! She mentioned that they get a few cyclists, but mostly walkers on the Two Moors walk.

Gradually, through the day, the blue skies were replaced with grey clouds, and the wind increased, but fortunately we were mostly protected by the high hedges. As we neared Hatherleigh, the rain started, but we got to our Inn before getting wet.

At the Tally Ho Inn, when we arrived at about 4.30, the pub was very busy – I guess because it was POETS day. After a wash and brush-up, Mal, one of our Camroller friends, had very generously paid for early evening drinks and nibbles for us. We stayed in the bar and had our excellent evening meals and more beer.

We had a discussion with the staff about breakfast in the morning. Continental breakfast is provided in the room, but a full English would not be available until 9am. As tomorrow is a long and hilly day, we are trying to leave around 8am, so will have to forgo the big breakfast, and find something enroute.

Only 2 days now, until we reach Land’s End.