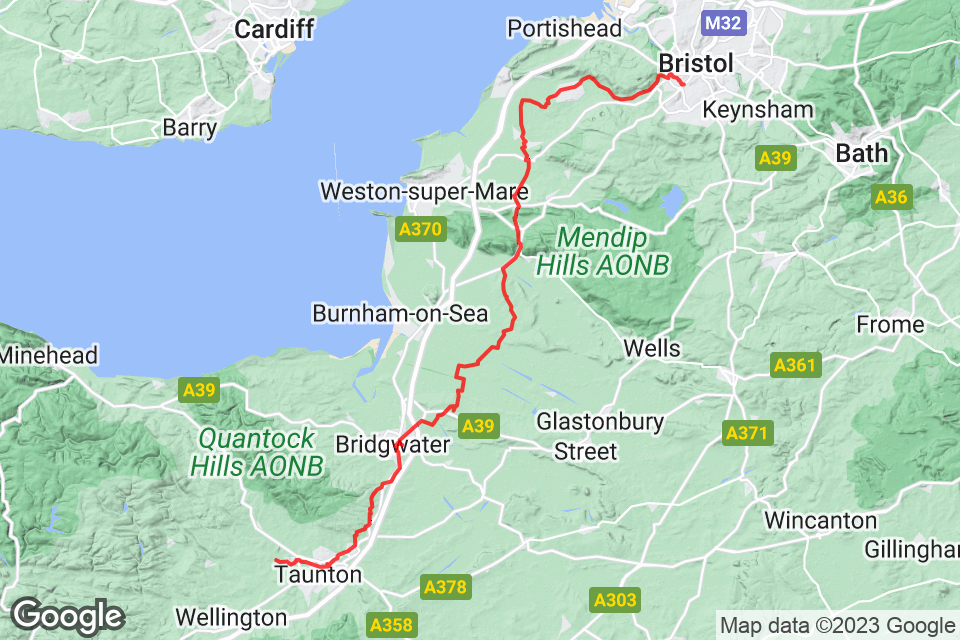 Last night, we decided to replan our route for today, as the weather forecast was pretty bad. The new route is about 10 miles shorter and avoids the Mendip hills.

All five of us are now back together to finish the ride. We set off from Bristol, heading towards Nailsea with threatening clouds, but not actually raining. We caught a glimpse of the Clifton Suspension bridge shortly after leaving.

A few stiff hills soon warmed us up as we cycled through the Ashton Court estate, where they hold the annual Balloon Festival. We continued to Nailsea with rain in the air, via the village of Cambridge Batch! As we were leaving Nailsea, it started raining and gradually got heavier and heavier, so we all eventually donned full wet weather gear.

We reached the town of Yatton and took shelter from the rain, in a bus shelter. We chatted with a local, and asked him where we could get a coffe and he suggested a couple of places, one of which was in the village ‘centre’. We found the Cottage Tea Room, which was a welcome refuge, providing coffee and lovely home made cakes – the fruit cake was served properly with cheddar cheese and an apple picked from the garden! We remained in the cafe for 45 minutes, or so, while the rain got heavier and then slowly subsided.

Setting off again, we headed for the Strawberry Line (NCN 26), a cycle path along an old railway track. This started as an excellent path but gradually deteriorated. Around Winscombe, the path was closed and we were sent on a very rough, muddy and steep off road section.

In one village we passed an orchard, full of apples, and, a few yards further on we got the strong smell of fermenting apples for making cider. Mmmmm.

A short section along the A31 and we then headed onto country lanes across the Somerset Levels. These were very reminiscent of the Cambridgeshire Fens, with lots of drains (rhynes) and several pumping stations. The farms were mainly animal rather than arable farms, as in the fens. Some of the roads were very wet and muddy, compounding the sorry state of our bikes.

The Levels are sparsely populated and we struggled to find somewhere for lunch. Eventually, we had a break and ate whatever food we were carrying.

A few miles further on, we reached Bridgwater, where Terry knew of a food van outside the railway station. Dave’s Snack van provided freshly made bacon baps and sausage and chips for Joe. While sitting there, David Dimbleby arrived on a train and got into a taxi van with some of his crew. Question Time is being made locally tonight,

For the final 12 miles to our B&B, we took a more southerly route than planned, to avoid going over the Quantock Hills. Even so, this had a couple of challenging hills. As we neared Taunton, we found a path along the Parret river and then some great paths through brand new housing estates. Our accommodation was about 4 miles outside Taunton.

When we arrived, we hosed down our bikes, then ourselves, and got back on our bikes to find a pub for dinner. The Orchard Inn was just over 2 miles away and provided excellent beer and food! We cycled back in convoy, in the dark, with all of our bike lights ablaze!