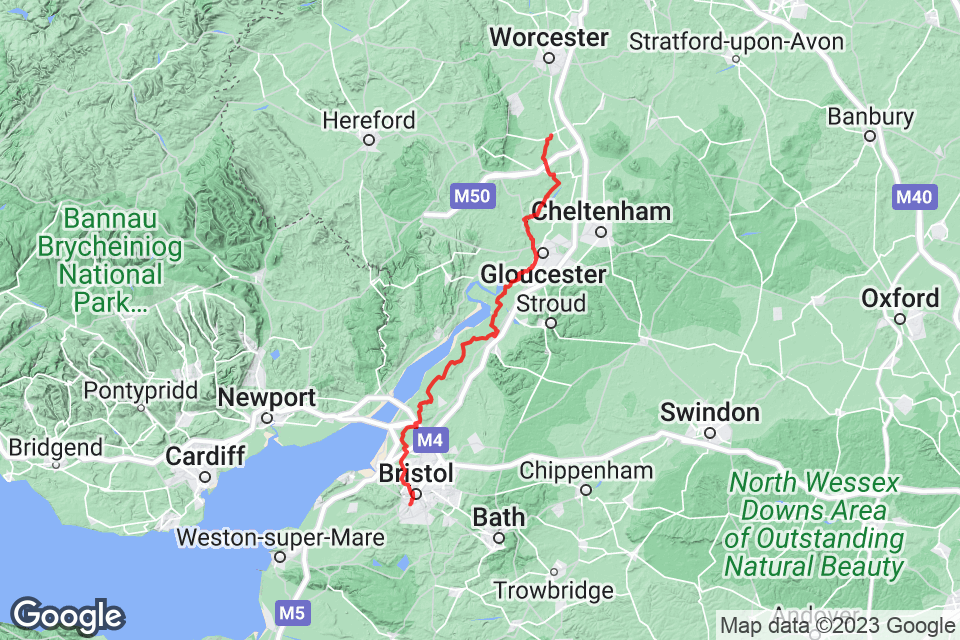 Watch a video of our route
It looks like the weather gods are beginning to become less kind to us. Although warm, a headwind would be with us all day.

We set off from the hotel, with small detour to go and see the river Severn, and then headed out of Upton. We were quickly on a quiet B road, and heading towards Gloucester. We crossed the M50 and then soon picked up the NCN 45 cycle route.

NCN 45 is a great route on mainly quiet country lanes, and is relatively flat. This took us close se to the Severn, and on into Gloucester and the Gloucester and Sharpness canal.

The canal through Gloucester, is obviously the site of the old docks, which are now industrial units on one side or new housing on the other. We were looking for a coffee stop, so asked some locals. They recommended the local Car Boot/market, just a few yards further on. This turned out to be like a flea market, with the constant sales pitch of a butcher selling bargain chickens! However, we found a stall selling coffee and freshly made donuts (and a hot dog for Joe!).

Continuing along the canal, the track began to get tougher, so we left the towpath and on to route 45 again. This followed country lanes again and eventually took us back to the canal. We waited for a swing Bridge to open, while a barge passed through, and then continued on the lanes until we rejoined the towpath a little further on. This turned out to be very rough, so we left the towpath and headed for Cambridge (the Gloucestershire version!), which is near Slimbridge. After that we rejoined route 45 and passed through lots of villages that, to me, had the feel of the North Norfolk coast.

Just outside Sharpness, we came across a pub, for lunch, called the Salmon Inn. We had a nice lunch outside while all the other customers were inside!

We crossed the M48 and M4 in rapid succession and kept getting just a glimpse of the two Severn crossings. As we neared Bristol, we started encountering a few steep hills, with one very steep one just before crossing the M5. It was then into Bristol and several hills, culminating in our steepest hill so far, at 19.5% gradient. Hats off to Mike for being the only one of us to cycle all of the way up, it was hard enough walking!

By this time, we had lost Joe, so Derek, Mike and Terry continued, before Terry left us to spend the night with his son. Derek and Mike fought their way through the rush hour traffic and got to the B&B. Joe arrived about 45 mins later having got lost through Bristol city centre.

For our evening meal, we found a nice, very local, Italian restaurant – a surprise as the area is pretty run down. The food was excellent, although they forgot to provide the starter we had ordered. They made amends by providing coffee on the house st the end of the meal.

Rowland has rejoined us this evening, and managed to join us at the end of our meal.