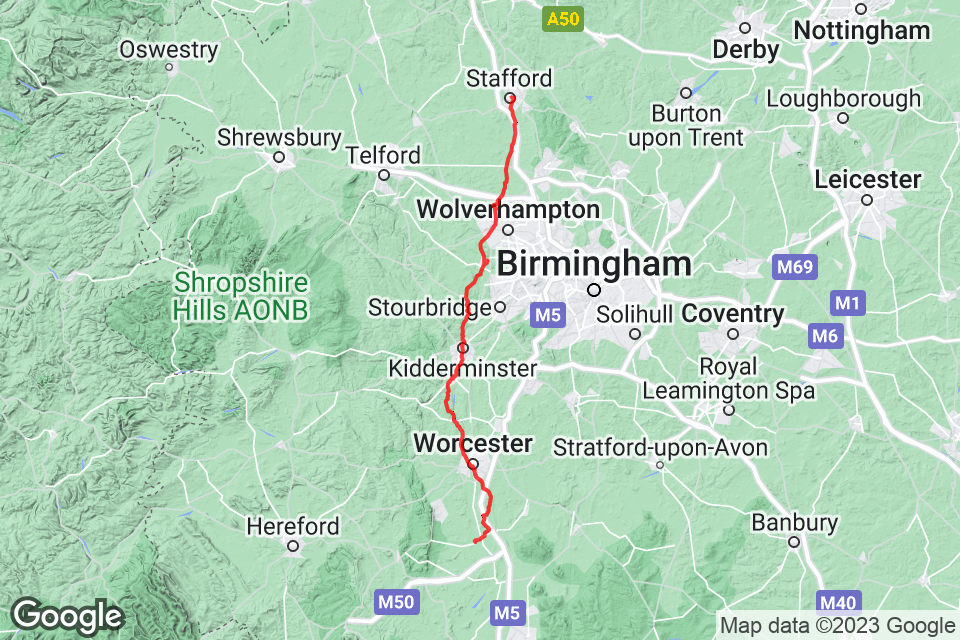 After a replan of our route last night, we decided to take a more direct route toward Worcester to reduce the mileage by 5-10 miles.

We left Stafford in a thick, chilly mist, into the Stafford rush hour. The next 10 miles were along the busy A449, only the last mile or so was along a cycle path. We then headed into quieter country lanes, in search of the Stafford and Worcester canal, which we found near Bilbrook. Unfortunately, the ‘path’ amounted to a muddy track not much wider than a tyre… So, after about a mile, we returned to the road.

At Tettenhall, we picked up the South Staffordshire Railway walk, which follows an old railway line.  This proved to be a wide, but very muddy track, so our bikes got caked in it. We left the track near Wombourn and headed into the village for a deserved coffee and cake.

We then changed our route again and decide to head toward Kidderminster to pick up another canal path. This took us across some rolling hills, with sharp gradient, the worst of which was just outside Kinver and had a max gradient of over 18% – our steepest yet.

We picked up the Staffordshire and Worcester canal again, near Wolverley, and this proved to be much more cyclist friendly, with decent cinder or tarmac surface. We continued along the canal through Kidderminster, until stopping for lunch at the Bird in Hand near Stourport. Here we met a guy, Nick, taking his young son, Beau, for a walk in a buggy. After chatting for a while, he asked for our website so he could sponsor us.

Again, we changed our plans and decided on a more direct route south, however after a few miles of country roads with steep hills, we decided to take the more direct A443 into Worcester. This was a wide route with more gentle gradients and not too much traffic. A quick photo stop in Worcester and then along the river and out on NCN45 towards Upton. By now, we were tiring, so the last 12 miles were a bit of a struggle, with a roadside stop for food and drink, but we got there ok.

Arriving at the hotel, we found a hosepipe to clean the worst of the mud from our bikes, which should help tomorrow.

Derek had another visitor tonight, an old University friend, Neil, who lives near Warwick and drove the 60 miles to come and cheer us on. After a catch-up Neil joined us for some drinks and a curry.

This is being written from the White Lion Hotel in Upton, which has very poor WiFi and Internet. Pictures will be posted soon!