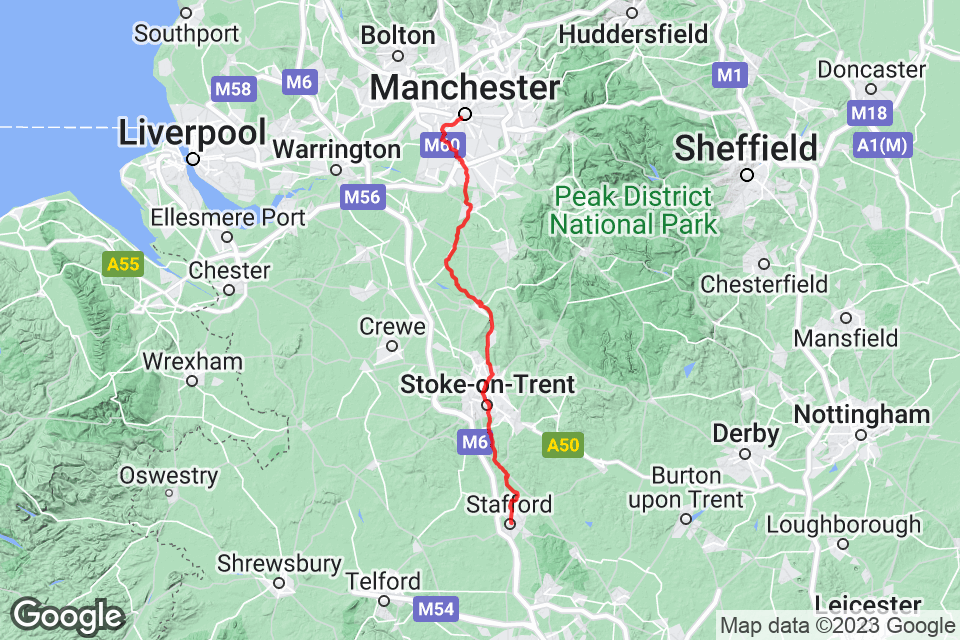 We awoke to the noise of ducks and geese alongside the canal, here in the centre of Manchester at the YHA. We were first in to breakfast, which was fortunate as there were a lot of people and, for a change, they were all young!

There was a light shower just as we were leaving, which had the unfortunate effect of making the cobbles slippery – and there are lots of them along the canal, making some of it a bit dicey!

It now got busy as we headed past Manchester airport and on towards Wilmslow. Mike helped a damsel in distress by reprogramming her SatNav, nearby to a road closure. We had a few more miles on a busy A road until we stopped for coffee and cake at The Corner Shoppe. We the headed towards Jodrell Bank and some nice quiet B roads through the Cheshire countryside.

At Congleton, we picked up the Biddulph Valley Way (NCN 55), a long dedicated cycleway on a disused railway track, that took us on a very gentle climb to 650ft. However, we had the recurring problem of gates that were not suitable for bikes – this affected Mike more than the rest of us as had to upend his bike to get through most of the gates.

On reaching the outskirts of Stoke we had a short, very sharp, climb to reach our 2nd peak of the day, which Joe did not like! A local filling station with a Greggs bakery provided a welcome lunch. A quick downhill, followed by a ‘tour’ of some deprived areas brought us to the Trent & Mersey canal.

We followed the towpath along this canal for the next 13, or so miles, passing a lot of industrial heritage and many locks. Most of the locks are exactly the width and length of a narrowboat and we saw a few holidaymakers struggling to get through. Several of the locks abutted bridges, so the boats are at the same height as the road and pass under the bridge immediately after exiting the lock.

We left the canal just after Stone and the remaining 7 miles into Stafford were mainly on quiet country roads.

We reached our hotel, the Vine Hotel, with a little trepidation, as in Arran we had met some people from Stafford who made some disparaging comments about it. But it has clean, comfortable rooms and excellent showers – all you could ask for!

A surprise awaited Derek, as Diane was waiting for him, with her friend Sally, who lives about 30 miles from Stafford. A much welcome boost!

Our evening meal was at Pizza Express.