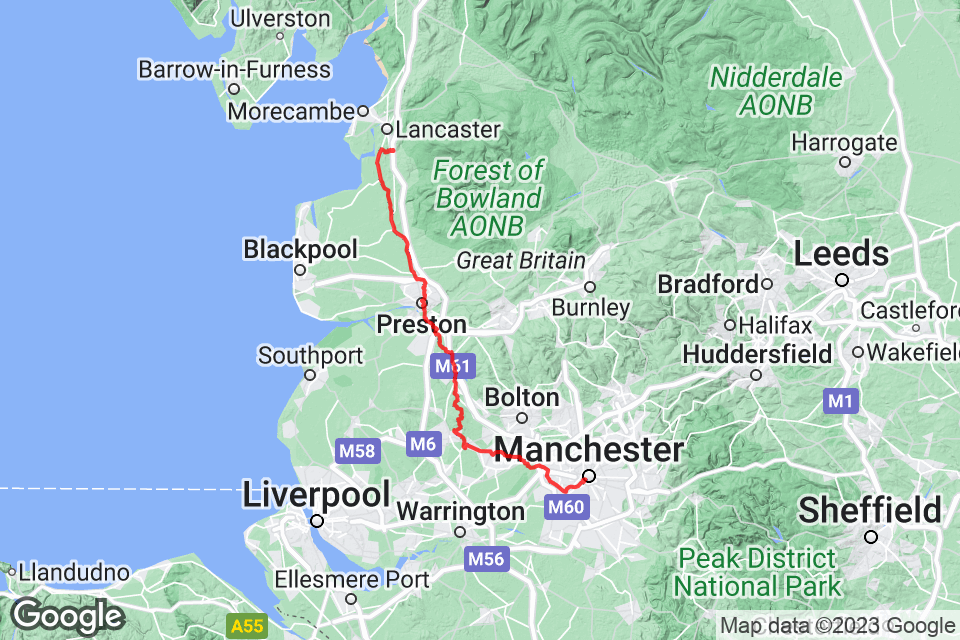 Watch a video of the route

The sun is shining as we head down for breakfast, but it is a little chilly, so we wrap up warm to start. We were early for breakfast, and found a breakfast restaurant, so sat down waiting for it to open. We were in the wrong place… it was eventually a very good breakfast.

Leaving the campus, we headed west to pick up our route to the south. Being a Sunday, there were lots of cyclists out, and we chatted to a few of them. The consensus was that we were doing the right thing in taking 19 days, rather than trying to rush it in 9/10 days. At one stop, Derek stopped unexpectly, causing Mike to brake, fail to unclip, and fell off. This was watched, with much hilarity by a group of cyclists.

After a while, we picked up the A6, which, despite being a very busy road, is OK for cycling, with painted cycle lanes along a lot of the road. Maybe being a Sunday helped.

On reaching the outskirts of Preston, we met with a group doing the Guild Wheel circuit of Preston. Shortly afterwards, a shout from Joe – his gear cable had snapped. A quick look on Google showed that there was an Evans Cycles open, just 2.5 miles away. A route through some of the older parts of Preston with dilapidated back-to-backs took us to the shop.

They were very helpful and fixed Joe’s bike for free and gave him and Derek spare cables too. Thumbs up for #EvansCycles👍.

We then headed into central Preston in search of coffee and cake!

The route out of Preston took us on dedicated cycle path (with some evil gates, stiles and some other devices to make it difficult for bikes!), under and over some major motorways and along the towpath of the Liverpool to Leeds canal. Just outside Chorley, we met a group of Veterans raising money for Queens Lancashire Regiment. For a small donation we had bacon butties, mutton pies, beer and soft drinks, for lunch! Continuing along the towpath, it got narrower and rougher, until we decided to find a road to cycle along, near Wigan.

A quick shower got us wet and a few mis-steps later we were cycling through various Manchester suburbs until we joined the Bridgewater canal near Tyldesley. This was a much better towpath with mostly tarmaced surface. This took us through some lovely marinas, and villages, but gradually came to more industrialised areas until we joined the Manchester Ship Canal. This took us past Old Trafford (where Man U were beating Everton 4-0). We finally left the canal with a couple of miles to go to find our YHA for the night. This was a great way to get into central Manchester, traffic free.

Our evening meal was at a Chinese restaurant called Little Yang Sing, which Joe knew from his days here. We had pre-booked a whole Peking Duck, which came with the crispy skinned breastmeat and the usual pancakes, but also Salt and Pepper duck with some of the remains duck, and soup with the rest. Dim Sum and a couple of main dishes completed the meal.