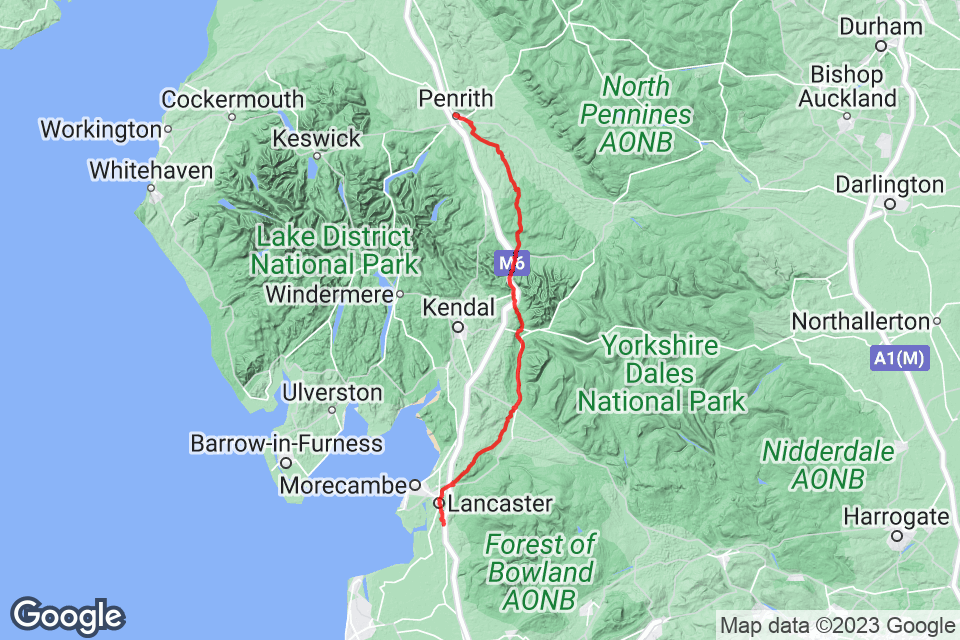 Watch a video of the route
We had two alternative routes planned for today, but after chatting with the host of our hostel, we planned another!

After breakfast, Derek was visited by a couple of friends who happened to be passing Penrith this morning. A welcome boost!

Today was our third day in a row of great cycling conditions, with sun in our faces and wind on our backs; no rain, but a definite chill in the air from the north wind.

We headed out of town on NCN 71. We got about 4 miles along the route and found it closed, as a bridge had been washed away in last years floods. To get around this, without going back to the start, we had to backtrack about 1/2 mile, cross a low stile and some long grass and then cycle along the main A66 dual carriageway for a mile. Hairy…

Back on route, we continued through lovely rural Cumbria and the Westmorland/Yorkshire Dales. The first, and highest climb of the day started from Crosby Ravensworth and took us up to 1125ft over 3 miles, through moorland of sheep and stone walls. Near the top we (just) caught a guy and his 8 year old daughter riding up the hill – they do it regularly!

A very rapid descent took us to the village of Orton and the Orton Scar Cafe. Terry managed to ‘offend’ the staff by saying Orton was in Yorkshire – it’s in Cumbria. They explained that many people make that mistake as the Yorkshire Dales had been recently extended to include Orton. Now wonder Terry was confused!

We left and headed towards Tebay, crossed the M6 and up the 2nd big climb of the day. 2 miles and 1000ft, with the M6 far below. Another rapid descent saw Mike, Terry and Derek achieve their fastest ever speeds – all around 46mph! A long gradual rolling descent took us to pleasant lunch in the garden of the Pheasant, in Casterton. After lunch we quickly passed just outside of Kirkby Lonsdale, with its very pretty old stone bridge, with lots of tourists and dozens of motorbikers, and over the river of kayakers.

After lunch we had relatively gentle rolling hills towards Lancaster. A cycle path along the river took us into Lancaster and heavy Saturday afternoon traffic. Another path took us to the University for our overnight accommodation.

We quickly discovered that there is not much to do on the campus outside of term time! We found a small place selling curries which were tasty and good value at £4.90. A bit of further exploring found a large bar where we were the only customers. We showed our darts prowess by taking forever to finish two games. On the final game we gave up trying to finish on a double and instead finished with ‘nearest the bull’!