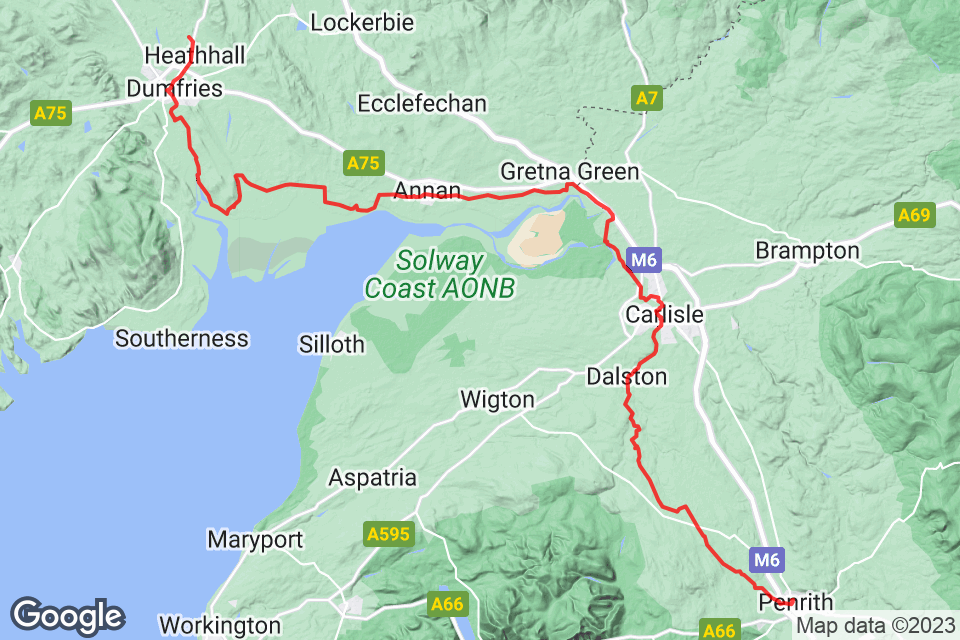 An exciting day in prospect today – it is the midpoint of our journey in both time and distance.

We awoke to a lovely morning, looking over the valley. Over breakfast, we decided to take a slightly more scenic route out of Dumfries and towards Carlisle, to take in some of the sights. Again, the weather was due to be kind to us with north westerly winds and little rain.

We took a great cycle path along an old railway track that took us into central Dumfries. This then took us onto NCN 7, alongside the River Nith, which we followed for several miles on quiet minor roads.

Arriving at Glencaple, we took a ‘cyclists stop’ and took in the scenery, while we watched a very hardy sole climb down a rope ladder to go for a swim in the river, despite the warnings of strong currents and quicksand!

We continued along the estuary into Caerlaverock nature reserve and then the castle, taking in the beautiful scenery and gorgeous warm sunshine.

We continued to Annan for a coffee in The Coffee Lounge, where the local (elderly) ladies were interested in our journey, and one took out details so she could make a donation.

After coffee, we continued on to Gretna, passing the Devils Porridge Museum along the way.

At Gretna Green we posed for photos at the first/last house in Scotland, which used to conduct weddings, but is now a cafe. We nominated here as our official halfway point of the journey – it was about midday and we had cycled 575 miles of our planned 1150.

We the crossed the border back into England and continued towards Carlisle. At Rockcliffe, we stumbled across a nice pub for lunch. We sat outside in the hot sun and a light rain shower!

As we neared Carlisle the traffic got much busier even though we were on minor roads, still following route 7. On entering the city, the heavens opened. A couple of navigation errors later and were were heading out on another dedicated cycle route.

We started the gradual climb towards Penrith, with a few steep hills along the way, passing through occasional villages but mostly open countryside. Lots of ups and downs later, we reached Penrith in another rain shower.

On arriving st the hostel, Terry and Derek decided to clean their bikes as the mud and rain was taking its toll.

Our evening meal was at a lively Tapas Bar, where you didn’t want to argue with the landlady… all the staff were dressed in flamenco-style. At one stage Viva Espania was played over the PA, and we were each given a garland. Not what we expected in Penrith!