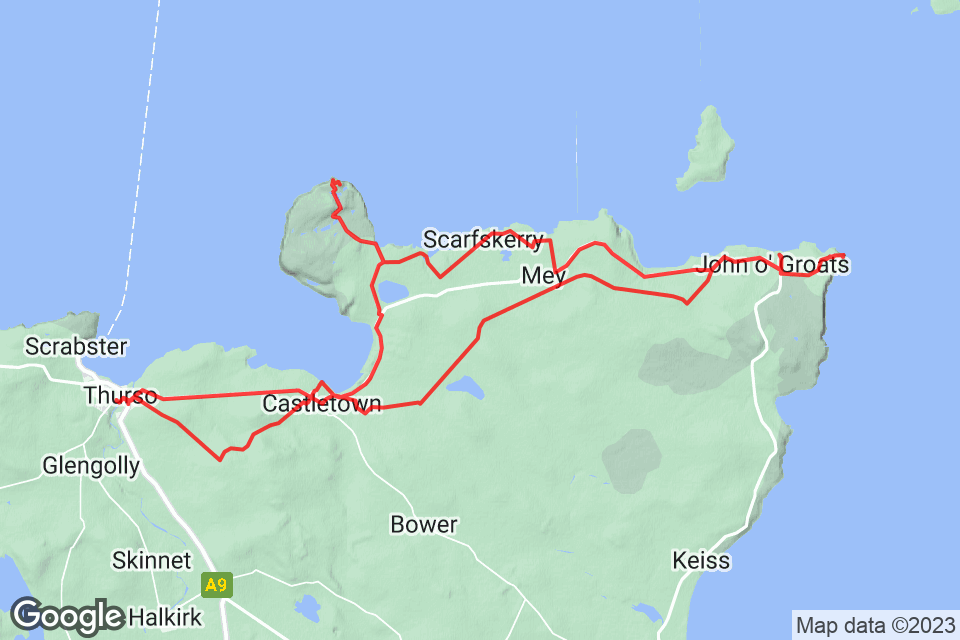 Watch a movie of the route
Finally, after months of planning, training and anticipation, we have reached the start of our journey!

We awoke to an overcast but dry morning with a forecast of showers this afternoon.

After good Scottish(kippers) and English breakfast we headed off at 9. A short climb and 5 old men looked over the Old Man of Hoy.

It was not Derek’s day as after 30 mins his phone fell off and smashed. Another 30 minutes and a pee stop resulted in two wet feet from the (peat) bog!

We reached John O’Groats without further incident and spent some time with cameras and chatting to friendly fellow tourists.

After coffe and cake we headed off to Duncansby Head for great views north of the Orkneys and some stacks to the south.

We then started heading West into the wind, passing a tidal power station (apparently the North Sea and Atlantic meet here with huge tidal flows), and Castle Mey (where the Queen Mum used to live, now a visitor attraction) before heading to Dunnet Head, the most Northerly point, for more views and a battering by the wind!

On the way back we visited Tesco to see if Derek could get a new phone – no luck. Back to the hotel and Derek found a repair shop next door who were very helpful and replaced the screen.

The evening was spent in a lovely restaurant on the Front in Thurso.